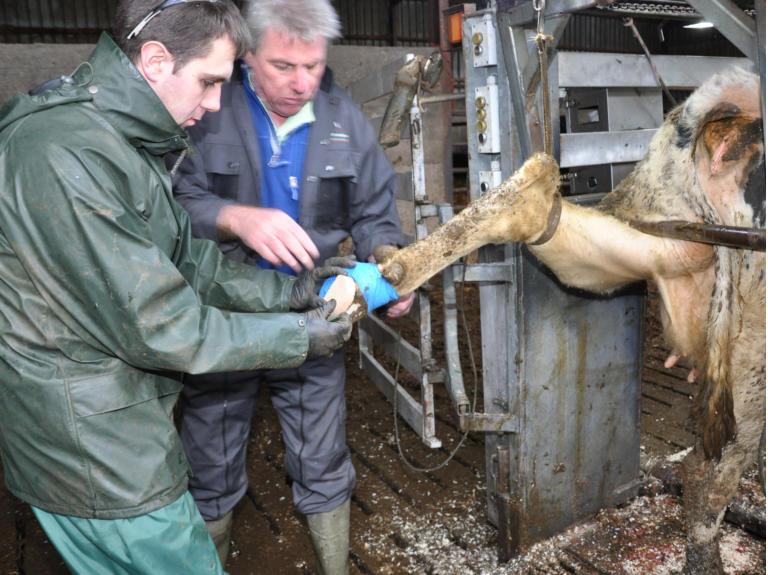 A lot of lameness that occurs later in springtime is due to conditions that occur while animals are housed, calving, dietary factors and environmental factors e.g. housing, scrapers, cubicles etc.

In order to minimise lameness farmers need to be aware of these problems and deal with them.

1. Changes at calving
• Increase movement of pedal bone due to softening of ligaments
• Changes in diet
• Stress
• Increase in laminitis (claw disease) due to calving and change of diet
2. Management to reduce lameness (laminitis)
• Gradual introduction of concentrates, especially to heifers
• Avoid walking long distances, especially after calving. Keep freshly calved cows near for up to 48 hours to allow pedal bone to settle back
• Gentle handling and movement around yard
• Good access to food and water
• Have roads in good condition as possible


Minimise risk of Mortillaro infection
Mortillaro (Digitial Dermatitis) is one of the most common infections of the hooves that cause lameness. As DD is very infectious, it is important farmers recognise it at a very early stage and deal with it.

Can be recognised by strawberry type legion in the heel and front of the claw, when rubbed it bleeds with a bad smell.

Also the hair stands up in and around the area of infection.

During and after calving there is an increase in the spread of Digital Dermatitis or Mortillaro due to animals lower immune system, stress (especially in heifers) and softer claws.

If a problem occurs on your farm immediate action is needed;

Note: Do not allow cows to go badly lame, lift and check at early stages of lameness.

Observe cows during milking;
1. Check heel and claws for DD legion to be teated
2. Overgrown claws-trimming
3. Significant difference between inner and outer claw need to be trimmed to distribute weight evenly